Just a reminder to all of you to call your moms today, and perhaps treat them to dinner.  While very few of them really understand our obsession with miniature painting (who does?), they still love us.

I was trying to think of something I could write that would relate to mothers and painting, and remembered this little guy: 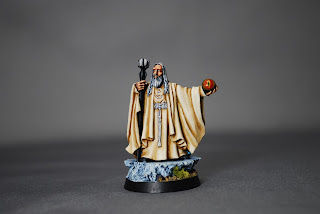 And another pic with a penny, just so non-painters understand just how tiny these models are: 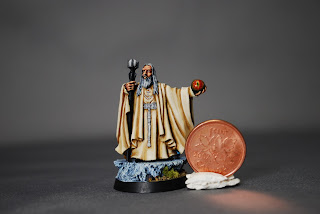 When my wife and I were still just dating (but shortly before I proposed to her), I had to try and explain what I did for a living to my future in-laws.  For some time, I had simply described myself as a "Contract Artist", which most people took to mean that I came up with some sort of 2 dimension canvas or promotional art for clients.

Of course, my in-laws wanted to know more, and I felt like I was decieving them by letting them think I worked on canvas with giant brushes.  So, one day when we were visiting them, I brought along a small carrying case and a few finished models.  I carefully selected ones that weren't TOO weird... no green alien Ork nobs in mega armour, no Sisters Repentia with exposed boobs, and no hermaphrodite Greater Daemons of Slaanesh.

After all, my father and mother in law were fairly conservative Menonites (which is NOT the same as the Amish, apparently).  They definately weren't radical right wing religious nuts... but more like really friendly and fairly accepting Christians that led pretty normal lives.  Fantasy and Sci-Fi weren't really things they had much exposure to, and miniature painting even less so.

Anyway, I sat them down at the dining table, opened my fig case, and let them have a look at a few miniatures.  The very first one my future mother in law picked up was this 25mm Lord of the Rings Saruman figure, and she exclaimed, "Look!  It's Moses!"

I think my jaw dropped.  Moses?  Really?  It was pretty obvious to me that it was Saruman.  It took me a second to realize that LotR and J.R.R. Tolkien wasn't something that EVERYONE knew about.  It wasn't certainly the FIRST thing that would come to mind to everyone in the world.

I didn't say anything.  It was fine that my in-laws thought I was painting miniatures of Biblical figures.  In fact, my future grandmother in law and aunt-in-law also dropped by a few minutes later, and when they saw the miniatures, they also exclaimed, "Wow!  That's a great Moses!"  I just smiled and nodded.  It was good enough to know that they knew I painted little models for a living, and still didn't mind me dating their youngest girl.

I have pretty great in-laws, which is probably the reason I have such a great wife, which is why my son has a pretty great mom.  Do I need to go into great detail about miniature painting and try and convert them to hard-core geekdom?  No.  It's just not necessary, and it would have just alienated them.  Not everyone in the world needs to be a geek, although I am certainly very proud to be a geek myself.  I was also raised as a Christian, which for me is 100% compatible with my love of Star Wars, miniature games and miniatures, Star Trek, Lord of the Rings, comic books, Firefly, etc. etc. etc.  I don't push my religious beliefs on anyone, which means I don't think I should push my love of geeky goodness on anyone either...

Although I did force my wife to watch the original Star Trek movies.  Hey, she knew what she was getting into when she married me, didn't she?  The mother of my child has to at least know who the heck Spock is!